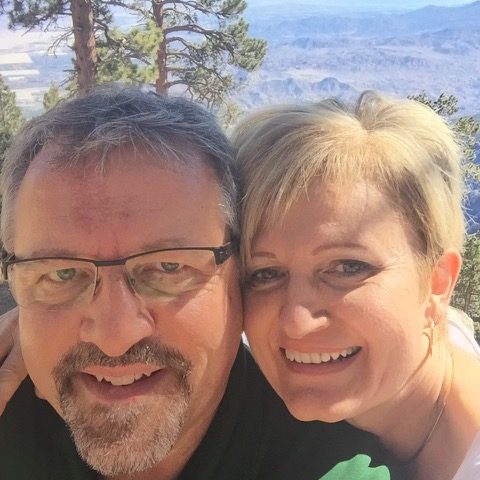 We Aren't Home Yet

Isn't it crazy how quickly time flies? I can hardly believe it's been over a month since I last posted a new blog post. In April, I was offered a writing assignment with a tight deadline. Almost all my waking hours were spent on that in May. But I've missed talking to my readers and hearing from you. I will admit that being super busy did help to distract me from my grief, but at times it still broke through. Because when you miss your spouse or someone else who used to be a part of your everyday life and enjoyment of living, the pain of that loss bursts through every barrier you might try to put up. In my personal experience, I'm better off accepting the pain when it comes, feeling it intensely, telling God about it, allowing God to comfort me, and crying my eyes out. If I do that, the heaviness lifts, and I'm able to move forward with my life—until the next wave of loss hits me.

The Lord is not slow in keeping his promise, as some understand slowness. Instead, he is patient with you, not wanting anyone to perish, but everyone to come to repentance.

Some people find great comfort in listening to music, especially worship songs with words that encourage them. I was one of the ones who had a hard time listening to music the first three or four months after my loss. Music made me sadder and caused unbearable pain. I prayed, I read books on grief and especially books about heaven. I listened to sermons about the end times. I so wanted the rapture to happen so I could leave here. My family and I would be with Curt again. Selfish, I know. But the hope of heaven and finally seeing God's plans for this earth move to the grand finale gave me something to anticipate with joy. But then I remembered that God's delay in returning is because He still wants more people to believe in Him. 2 Peter 3:9 NIV, "The Lord is not slow in keeping his promise, as some understand slowness. Instead, he is patient with you, not wanting anyone to perish, but everyone to come to repentance." What a wonderful and loving God He is.

My children, grandchildren, and I went to the Adirondack Mountains in upstate New York for my husband's graveside service. Curt's parents and sister met us there. Curt's cousin did the committal service, and my father-in-law shared a beautiful poem called, My Son. It was difficult to see my husband's name on a tombstone with a birth date followed by an end date. It's one of those moments that leaves you staring and shaking your head. How did what seemed impossible—us having to part—happen so soon?

There are flashes of memories almost too difficult to bear. Curt getting the news from his doctor over the telephone that he has metastatic stage-4 cancer. Sitting in the oncologist's office and hearing him tell us that, at best, Curt would have one to three more years if the chemo worked. Hearing a hospital physician tell me that there is nothing more they can do. "Call your children to come today if they want to see their father while he can still hear them." Looking at Curt afterward, I asked him, did you hear? The look of sadness on his countenance as he nodded his head will stay with me forever. As heartwrenching as those moments were, I love him so much that I'm glad I could be there with him. I cherish each moment we still had.

One of the days after we realized we were dealing with cancer that had a hopeless prognosis outside of a miracle from God, Curt and I sat together on the front porch of our home. Every task that needed doing seemed insignificant compared to our need to be together. We talked, but I don't remember what we said. I only remember wanting to savor his nearness. Because if God in His sovereignty chose not to heal him, I would soon be sitting on the front porch alone. Last week, after planting flowers in my garden, I sat on the porch chair, the one he had sat in that day. I sat alone as that memory flashed before my eyes. I couldn't stop the tears.

Sometimes life is just hard—very, very hard. But how will I respond in those moments? Will I cling to the faith I claimed to have or was it all lip service while everything was going my way. Gut-wrenching moments are opportunities for faith to rise and give us hope for the future. The reason we can have hope is that God is still with us. He didn't go away when our spouse passed on to eternity. God is still near.

In Acts 28:3-6 NIV, we read: "Paul gathered a pile of brushwood and, as he put it on the fire, a viper, driven out by the heat, fastened itself on his hand. When the islanders saw the snake hanging from his hand, they said to each other, 'This man must be a murderer; for though he escaped from the sea, the goddess Justice has not allowed him to live.' But Paul shook the snake off into the fire and suffered no ill effects. The people expected him to swell up or suddenly fall dead; but after waiting a long time and seeing nothing unusual happen to him, they changed their minds and said he was a god."

Grief can be like that snake. It's tempting to ask God, "Why?" over and over again. It's tempting to be mad at God because He had the power to spare me this grief, but He refused. It would be so easy for me to stay focused on my broken heart. But, in the process, it may cause my heart to become bitter. I have to shake off the temptation to point my finger at God the same way Paul shook off that snake. In God's wisdom, He chose to take Curt home. The truth is, God loves Curt, and God loves me. Since He allowed me to suffer this loss, there is a reason why this was better for us even though it's killing me. Am I willing to trust God? I wrote in a previous post that God is more interested in our happiness in eternity than on this earth. Eternity will last forever. So, am I willing to trust God with my future by accepting His sovereign plan in this life that is compared in the Bible to a vapor, here today and gone tomorrow?

I want to share with you something my husband wrote in his journal several years ago. He based this on Acts 28:3-6, which I quoted above.

We spend way too much time examining the vipers that attach themselves to us. Vipers are poisonous and must be dealt with promptly. Do not examine the viper, do not fear what is going to happen if the venom enters your veins. Get rid of the thing.

When temptation comes, when anxieties increase, when confusion prevails, SHAKE IT OFF. Get rid of the thing. Examine and study later. But action is what you need at this point. Vipers may even be beautiful, but they are deadly. Shake them off.

It wasn't even Paul's fault. The viper was there. The heat of the fire, the circumstance of the moment brought it to the surface. Paul did not waste time in examination. He acted straightaway. Study how to avoid vipers later; act now.

I don't want to allow the temptation to distrust God to seep into my heart. I refuse to doubt His ability to heal. I will not question God's love for me. Instead, I choose to cling to faith. I will keep reminding myself that there are so many others who seemingly never received that for which they'd hoped. Hebrews 11:13 NIV says, "All these people were still living by faith when they died. They did not receive the things promised; they only saw them and welcomed them from a distance, admitting that they were foreigners and strangers on earth."

We aren't home yet. We are foreigners and strangers here. One day, the promises God gave us will be fulfilled, but perhaps not in this life. Am I willing to accept that? Yes, I choose to accept God's will. But acceptance of God's sovereignty does not mean my pain will disappear immediately. Yet God's Word in Hebrews 13:5 NIV remains the same, “Never will I leave you; never will I forsake you."

One tries to reconcile himself to a place
that has caused him greatest pain
yet holds the potential of his greatest
joy in working. At times the memory
of what has transpired outweighs
the hope of what can happen but
has not yet happened—the desire
to bring closure—close the door
on a painful yesterday while
waiting in the anteroom to
tomorrow's joy—in this
waiting room, one looks for
escape—yet not through the
door of tomorrow's joy—escaping
yesterday without embracing
tomorrow—destroying this
anteroom destroys this only
door to joy—a joy connected
to yesterday's sorrow, a
sorrow never bathed in hope,
never drenched with redemption,
a wasted sorrow, a seed
without fruit—a travailing
womb that bears no child
but as one gropes through dim
light for the knob that opens
the door, hope is its only
inner compass, faith its only
fuel. When faith wanes the
room spins, and hope cannot
find its way—the room
between yesterday and tomorrow
is called today, which can
only be navigated through hope
and faith.

During the first week after Curt passed away, my children said to me, "I don't want to waste my grief. I want to learn all I can from it and I want to grow. Dad's death will not have been in vain in my life. Whatever I must learn, I want to learn it well." They were speaking the words that I felt in my heart also. I will not waste my grief. The only way I can gain the most from my loss is by trusting God and disciplining myself to submit to Him. He wants to comfort me, and He knows just how to do it. I will trust Him.