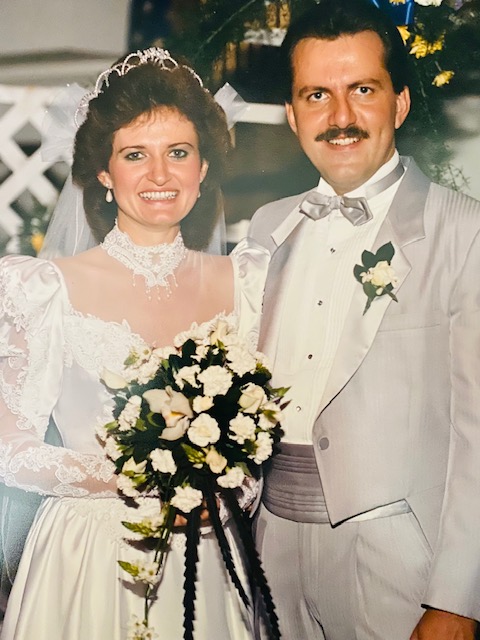 We Aren't Done Yet

Losing my husband has caused me to review my life. This week, I thought back to when I first received the call to ministry. I was twelve years old when I had a strong impression—probably my first time to realize the Lord was speaking to me—that I would be a pastor's wife. I didn't suddenly start acting more holy than the day before. Nothing changed drastically in my life. When I was old enough to date, I didn't only look at boys who wanted to become pastors. I shoved that "call" to the back of my mind and figured that if God wanted me to be a pastor's wife, He would make it happen. Besides, what if I got it wrong? I attended a German-speaking church of about sixty-five people. We had a fun youth group, but all the boys were like brothers to me, and I was like a sister to them. How was I supposed to meet anyone, let alone a pastor?

Well, I can tell you that God will accomplish whatever He sets out to do. Several years later, as Curt and his family drove back home to Ohio after General Council in San Antonio, people in the car passing them waved enthusiastically. Curt's family waved back but didn't know who they were. (I often suspected that Curt had a photographic memory. When he saw a face, he never forgot it.) So, when the Dalaba family arrived at the next rest stop, he immediately recognized the friendly people in the car that had passed them. Curt went right up and greeted them. It turns out the husband pastored a German church in Ohio. Curt had just recently come back from doing ministry in Germany. When they discovered he could speak German fluently, they told him about a German church in New Jersey that needed a pastor. Curt wasn't interested. But they insisted he allow their superintendent to contact him, so he agreed. Long story short, Curt became my pastor.

Even though I was in a relationship at the time and Curt had made it clear to everyone that he will not date anyone in his church, nothing could stand in the way of God's plan. That was how we met, fell in love, and shared 33 years of ministry. Only God can take a girl from a small church in a small town in New Jersey and cause her path to cross with a single pastor who had been in Germany and was now an associate pastor in Ohio. And He did it by a "chance" encounter with strangers at a rest stop on a highway.

Was it a coincidence that a young man without an ounce of German blood running through his veins got a passion for the German language and taught himself without a teacher? He learned it so well that he could preach and teach in the German language. It was this ability that opened the door for us to meet.

"God took me all the way back to New Jersey,
just to find you.
He knew I needed you,
knew you would be the best friend I'd ever have,
knew I needed everything about you,
because we'd complement each other so well."

“Your eyes saw my unformed body; all the days ordained for me were written in your book before one of them came to be.”

God had divinely arranged our meeting, but what does it all mean for me now? That's what I pondered and asked the Lord. I'm no longer a pastor's wife, so what is my purpose? That calling has come to an end. What now? Did cancer destroy God's plan for my life?

The answer is a loud and resounding NO! Cancer cannot destroy God's plans because God is bigger than cancer. Psalm 139:16 tells us that even before we were born, all our days were ordained and written into a book—God's book. Yes, that includes the days Curt battled cancer and the days I struggled beside him to make him comfortable. Although we were surprised to discover he had cancer last June, God was not surprised. It was part of His sovereign plan for Curt. If that were not so, it would make Him into a weak God, which we know He is not. He is all-powerful.

"A person’s days are determined; you have decreed the number of his months and have set limits he cannot exceed."

I believe when Curt was born, God already set his lifetime at 65 years, two months, and two days. When we married, God knew that after 33 years and thirteen days, my heart would shatter into a million pieces. He knew I'd be a widow at 59. That also means that being a widow is His plan for this stage of my life.

It seems cruel that God would allow this to happen to His children, but who are we to question Him? Remember, He didn't spare His Son either. God knew the reason His Son had to suffer and die. He also knew death wasn't the end. There would be a resurrection. God knows things we cannot fathom. He has a sovereign plan that is truly best for us and His Kingdom.

It reminds me of Joseph and his brothers. The brothers wanted to get rid of him, and they did a despicable thing when they sold him as a slave and then allowed their father to believe his son had died. But even then, God was still in control. He could have stopped them, but He didn't. God had a plan, and yes, he used sinful men to accomplish it.

"I am Joseph, your brother, whom you sold into slavery in Egypt. But don't be upset, and don't be angry with yourselves for selling me to this place. It was God who sent me here ahead of you to preserve your lives. This famine that has ravaged the land for two years will last five more years, and there will be neither plowing nor harvesting. God has sent me ahead of you to keep you and your families alive and to preserve many survivors. So it was God who sent me here, and not you! And he is the one who made me an adviser to Pharaoh—the manager of this entire palace and governor of Egypt."

Joseph told his brothers that it wasn't their sin that accomplished all this. It was God. In the same way, it wasn't cancer that took Curt. It was God. And it was God's will that I am a widow now and continue working for Him in partnership with the Holy Spirit, no longer as a pastor's wife, but still as His daughter.

Accepting this doesn't make all the pain of grief disappear. Even today, as I read Curt's journal entry on this day last year, I curled up on my bed and wept tears of sorrow. It hurts. I miss him. But God is still in control. I am not living in God's Plan B for me. I am still in God's Plan A. Accepting His sovereign plan helps me to relinquish my death grip on what used to be and accept God's continued plan for me. In His plan, I will find a priceless treasure.

I want to share with you one of Curt's journal entries in 1999. He takes a closer look at Matthew 13:44, "The kingdom of heaven is like a treasure hidden in a field. When a man found it, he hid it again, and then in his joy went and sold all he had and bought that field."

It's very hard to give up what you have until you've found something better. We think of this very often in terms of money but think of some of the things we cherish; habits, patterns of thought, methods of operation. We don't give them up until we find something better.

But you say, "I've found Jesus, so why do I still battle?" It has to do with the value—placed worth—that He holds in our lives.

Seek first the Kingdom of God and His righteousness—love God first. The Kingpin—the central point.

He must increase; I must decrease. The small "g" god must come off its pedestal.

The Kingdom of heaven is a priceless treasure that is to be desired above all else. The man had to pay a price for it. It is free; it just costs us everything we have.

Accepting God's sovereign plan is relinquishing my will for His. If you've recently lost a loved one, this might take time. God understands. He will work with you. But eventually, you will have to let go of the past so you can move forward. I'm not saying I will forget Curt. That's not even possible, nor do I want to let go of my memories of him. His life and ministry influenced my life and made me who I am today. I thank God almost daily that I was blessed to be Curt Dalaba's wife. No woman could be more blessed than I was. But just like Tarzan had to let go of one vine as he grabbed the next one so he could keep moving forward, I must let go of the past to keep moving forward.

Here is the really wonderful and exciting part. Curt isn't in the past either. He's moved forward. By letting go of the past, I'm moving forward in God's plan—with Curt. We are in different worlds now but still submitted to God and His sovereign plan. And one day, we will meet again. Not in the past, but the future. The past is now a beautiful memory. It's okay to look at and treasure the memories. They give us reasons to worship and praise God for all He has blessed us with and all he's brought us through. But we are not done yet. There are more people whose lives we must touch, and God wants to use you and me.

"...But one thing I do: Forgetting what is behind and straining toward what is ahead, I press on toward the goal to win the prize for which God has called me heavenward in Christ Jesus."