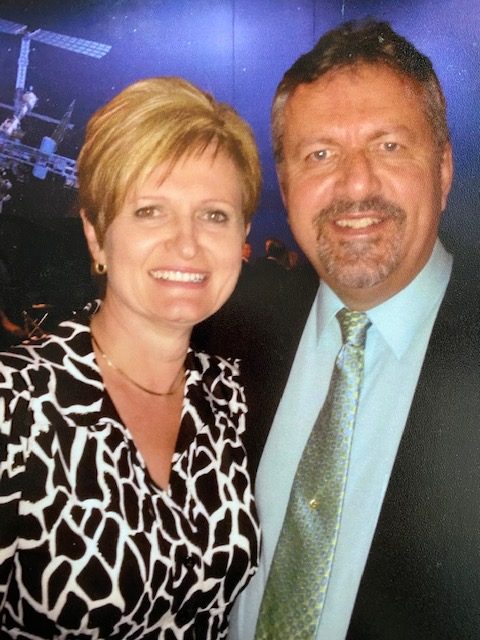 Lessons Learned in the Dark

I've heard it said that there's such a thing as widow brain. Have you ever heard of it? The symptoms are forgetfulness, extreme sadness, brain fog, irritability, fatigue or exhaustion, numbness, and nausea. I've had them all at some point since the end of September. When driving home from the grocery store a few months ago, I went right through a four-way stop sign. That's never happened to me. Never. It wasn't until I heard the blast of someone's horn that I realized what I'd done. It wasn't a close call or anything like that. But it could have been. I have thanked God over and over again for helping me not to have injured someone. After that incident, I looked up widow brain, something a friend had mentioned.

Last Friday, I went grocery shopping and used the self-checkout lane. I had added some items to the cart that I didn't urgently need. I just didn't want to run out. The two items were crunchy peanut butter and marshmallow fluff, so I can make a fluffernutter sandwich for breakfast if the mood hits me. Curt taught me about fluffernutters, so it's special to me. Okay, I admit it, I love them and would eat fluffernutters even if someone else had introduced them to me. Anyway, almost two days later, I realized that I didn't have the crunchy peanut butter or the marshmallow fluff anywhere in the kitchen. I checked the trunk of my car just in case I forgot to unload a bag. Empty. It was then I realized two more items were missing. I must have left one bag of groceries at the store checkout. Since it was Sunday, I decided to go to church and not let it bother me. On Monday, I called the store. They suggested I come in, and they would look at my purchase receipt. Have I ever mentioned in my blog that I love modern technology? You can say whatever you want about it. But without a doubt, it has made my life easier. As I drove to the store, I thought of how awful I'd feel if we couldn't prove I'd left the groceries, but the store returned my money just because I'm a customer. I wanted proof that I had left the bag after paying for it. Well, they tapped in some numbers from the receipt into their computer, and yes, indeed, they had restocked all the items I'd purchased. They had proof that I had a right to those items, and I didn't need to depend on their grace. Again, I'd never done anything like this before. Widow brain? I hope that's all it is, and I will heal with time. Ha!

Grief is the strangest thing ever. Nothing is the same. The worst thing that could happen has happened. In Griefshare, I heard that after you lose a loved one, you have to deal with the terrible fear that you will lose someone else you love. I mean, it happened once, so what's to keep it from happening again. I dealt with this fear for a while. But now I feel the flip side of that fear. My worst fear has come true, and my husband is gone. My future is upside down. But I haven't fallen apart. I'm still here breathing, eating, living, loving, and, yes, even laughing. I don't know how this is possible, but I've survived, and I feel braver, more courageous.

My trust in God reaches deeper, which in itself is unfathomable. After all, didn't God let me down when He didn't heal Curt? But by choosing to trust God at the beginning of this journey, even with a broken heart and tears running down my face, even as I shouted that I couldn't understand. That simple step of faith—saying, "I trust You, God. Even now, I choose to trust You." That step planted my wavering faith in rich soil where it had all it needed to grow as God shone the light of His Word on that dark, cold ground, warming it with His devoted love. I do not grieve as one who has no hope (1 Thessalonians 4:13).

Focusing on Heaven and studying the book of Revelations were two key factors in helping my faith grow. Since losing Curt, I have fixed my eyes on eternity like never before. The Bible says, "A person’s days are determined; you have decreed the number of his months and have set limits he cannot exceed." God was faithful to Curt for all the years he decreed for him. I know that when I reach the final day ordained for me on this earth, God will also be faithful to take me home. My heart leaps with joy at the thought. I don't relish dying, but death doesn't scare me. It's the goal of eternity with God that has made me more courageous. This sinful world can wreak havoc and cause many more tears to flow, but it is well with my soul, and my future is secure in my Heavenly Father's love.

A friend recently sent me this quote.

The sweetest songs of earth, have been sung in sorrow. The richest things in character, have been reached through pain.

No one wants to face the sorrow that creates this depth of character and insight. But when you find yourself in the darkest phase of your life, wasting the grief on bitterness would be the greatest loss. There is much to learn from pain. The most profound lesson is how deep faith can grow in times like these. Bitterness leads to regrets. But relinquishing your dreams to God takes you to new heights. You can never reach the pinnacle of faith without walking through the darkest valley fully surrendered to God.

I’m not the same person Curt left behind last September. If we could take a walk together today, I’m sure he’d notice I’ve changed. I can only imagine the change in him now that he's seen Jesus and knows the answers to the questions we still contemplate.

Here is a quote from a book that has been a blessing to me on my grief journey. I wish I could recommend it to you, but it is unfortunately out of print.

Like countless others who have suffered loss, I've received a gift—the sudden, clear, accurate realization that something is vitally wrong with this world. Our lives, like so many things in this world, are transitory; without God's ultimate meaning, there is no meaning. Creation is groaning, says Paul, subjected to futility, eagerly longing for God to straighten things out. An adequate theology will not avoid this truth but embrace it.

Since my last blog post, I've reached the ten-month mark of Curt's passing. Just writing that sentence brings such intense pain that my eyes well with tears. Curt didn't want to leave me any more than I wanted him to go. We didn't get a choice in the matter. I only get to choose how I'll respond.

Curt wrote the following in his journal twenty-six years ago while we lived in Germany for four years.

I want this new year to draw me much closer to the Lord. I want to walk closer to Him than ever before. More Word. More Prayer. May He fill my heart with greater goodness, purity, focus, determination, love, etc. As regards our future, we must leave it in God's hands, knowing that at the right time He will make it clear; just as he did in getting us here in the first place.

We left for Heidelberg at around 12:45. It snowed off and on the whole way. There was a good crowd in church. The real surprise came when they asked me to go upstairs to pray with two men that wanted to accept Jesus. They were serious. The groundwork was already laid. They repented and asked Jesus into their hearts. It was a great moment.

Isn't it like the Lord to give encouragement when we need it most. We don't know what our future holds, but I'm determined to take it one day at a time.

God brought us through so much, guiding us every step of the way. One day at a time. Now, I'm walking out the remainder of my days alone—but not alone. I still have my family, my friends, church fellowship, and I'm meeting new people as I keep moving forward. My prayer is that God will use me to advance His Kingdom. As long as I'm on earth, I still have the opportunity to help strengthen people, build their faith, lead them toward God, and work wherever God places me. I still have time to store up treasures in heaven.

“Do not store up for yourselves treasures on earth, where moths and vermin destroy, and where thieves break in and steal. But store up for yourselves treasures in heaven, where moths and vermin do not destroy, and where thieves do not break in and steal. For where your treasure is, there your heart will be also."