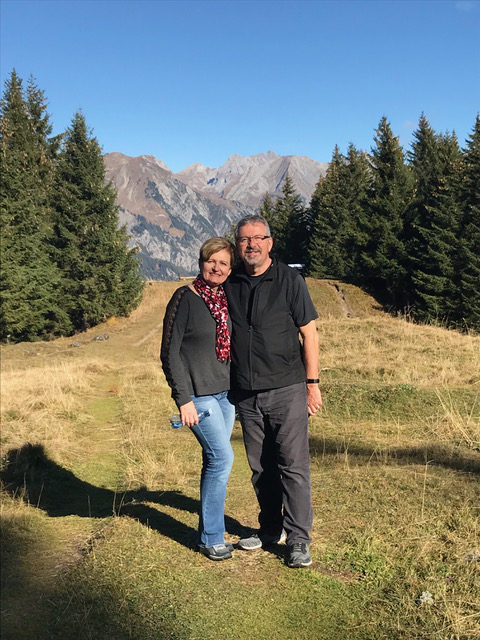 When Curt began his battle with cancer last summer, he posted on Facebook about the greater reality. Here are his words from that post:

A couple days ago in the morning while waiting for the results from the nuclear scan, I was reminded of my own sermon on the greater reality (faith). In 2 Kings 6, there's a story about Elisha and his servant. They were surrounded by an enemy army. This army was their reality. Elisha was calm. The servant was a nervous wreck. The difference was that the servant could only focus on the reality, but Elisha was aware of the greater reality.

Elisha prayed, "Lord, open his eyes to see that there are more with us than there are with them."

On the mountain tops were what Elisha saw: chariots of fire!

So, our reality is a giant named cancer.The greater reality for us is that the Lord is near us and we hear him and we feel hopeful. I pray that God keeps our eyes glued to the mountaintop and not what's coming down the driveway.

After Curt passed away, this post haunted me. I couldn't bring myself to re-read it. We had both hoped and prayed that God would reveal His greater reality to us by overpowering cancer and healing Curt completely. That didn't happen—not here on earth. It was easier to ignore this post than to reflect on it. But in the back of my mind, I knew I would have to reexamine it one day and discover what God was saying to me.

As I thought about what I should write in my blog this week, Curt's FB post came to mind, so I did a search and found it. As I re-read it, I was surprised that Curt never talked about healing when he spoke about the greater reality. He said, "I pray that God keeps our eyes glued on the mountaintop and not what's coming down the driveway." Had he spoken prophetically? At the time of this post, we didn't even know what type of cancer he had.

Toward the end of his life, despite the pain Curt endured and the disappointment of not improving physically, he said with tears in his eyes, "I love God so much." His hope remained in the Lord, the God he'd dedicated his life to serving. And Curt did it with faith and integrity.

It reminded me of what I've read countless times in Hebrews 11. We read there about the faith of Abel, Enoch, Noah, Abraham, and Sarah. They held onto the promises of God in faith.

All these people died still believing what God had promised them. They did not receive what was promised, but they saw it all from a distance and welcomed it. They agreed that they were foreigners and nomads here on earth. Obviously people who say such things are looking forward to a country they can call their own. If they had longed for the country they came from, they could have gone back. But they were looking for a better place, a heavenly homeland. That is why God is not ashamed to be called their God, for he has prepared a city for them.

Curt was a man of multiple talents, interests, and hobbies. He was a phenomenal expository preacher, wise counselor, and leader of men. But he was also gifted in art, photography, poetry and other writings, languages, and so much more. Curt was fascinated by life and wanted to explore as much as he could. Here is a poem he wrote that I recently found:

I will not doubt though sorrow falls like rain,
And troubles swarm like bees about a hive.
I believe the heights for which I strive
Are only reached by anguish and by pain;
And though I groan and writhe beneath my crosses,
I yet shall see through my severest losses,
The greater gain.

It's tempting to ask God, "How could you take one so learned and gifted? He still had so much to offer. How much could have been accomplished for the Kingdom if he had lived." But this life is the practice ground for eternity. None of Curt's talents are wasted or lost. His best writings will be in heaven. Every language he learned has prepared him for his responsibilities in the next life. And his joy of exploring and discovering new territory will have no end when Curt sees all God has prepared for him. This world is our reality, but the greater reality is yet to come.

So, with the Lord's help, I continue to keep my eyes glued to the mountain top, and not on what's coming down the driveway. May this grief journey never be wasted, but lead me closer to God and prepare me for eternity.