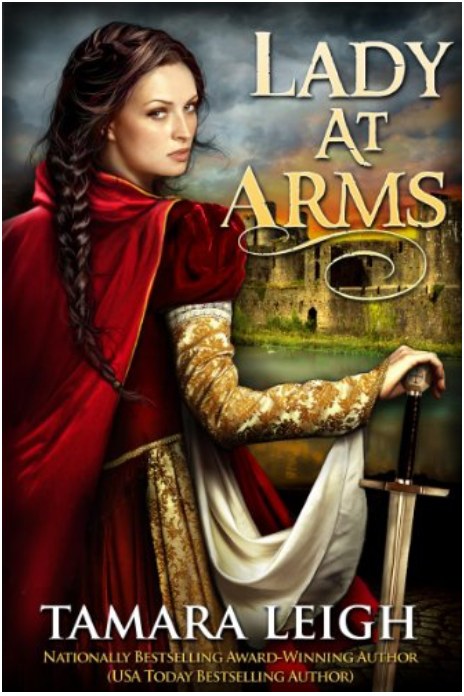 The book I'm featuring today is not my current read, but it is a book I enjoyed reading. Lady at Arms by Tamara Leigh is a Medieval Romance.

Prologue: "Gilbert!" Heedless of the brigands ransacking her dowry wagons, Lizanne Balmaine pulled free of her maid and rushed past the torn and blood-strewn bodies scattered over the ground. The old woman called to her, but Lizanne ignored her desperate pleas.

Chapter One: By degree, Ranulf Wardieu became cognizant of his surroundings.

HE WAS THE VILEST OF MEN
Lizanne Balmaine has spent years honing her skills at arms, determined she will never again be at the mercy of any man. When she comes face to face with the one who stole her future, she seizes the opportunity to exact revenge. Soon he is her prisoner, at her mercy. But something is different about him, something that makes her question her purpose. Is it possible a man can be so changed? More, can she right the wrong that could lay ruin to her family?

SHE WAS A QUESTION NEVER BEFORE ASKED OF HIM
Ranulf Wardieu does not seek a bride, nor a settling of scores when his mission for the king places him in the path of a beguiling, raven-haired maiden. But fascination turns to fury when she imprisons him. Accused of wrongdoing, the nature of which she refuses to reveal, he discovers the lady is as skilled at wielding a sword as she is at verbal sparring. When he bests her at her game and his jailer becomes his captive, he is determined to learn what wrong he has done her. However, as they engage in a battle of wits and wills and he glimpses her woman’s heart, he discovers Lizanne is a question never before asked of him—one his own jaded heart refuses to answer.

This was an exciting read. The story captured my attention from the first page and held it to the end. Lizanne was often immature in her actions at the beginning—perhaps the first half of the book. But since she's only 19, it is perhaps understandable. She allowed her actions to be guided by her emotions before considering the consequences. However, you see her mature and make wiser choices as the book progresses.

I liked Ranulf from the beginning to the end of the story. Though he is strong, he is caring of others. You especially see that as he patiently deals with Lizanne. However, he is still a warrior and certainly not someone to be pushed around.

The storyline and how it is developed is believable and well thought out. It is listed as a Christian story. It's clean and there are several times when someone says they are praying or God is mentioned, so perhaps that may suffice to place it in the Christian romance genre. I did not come away feeling inspired in my Christian walk. But it was a very enjoyable, clean, and entertaining read. Tamara Leigh is a gifted writer and storyteller. For that reason, I gave this novel 5 stars.

Click on the book cover or the book title to buy it on Amazon.

Pick up a book near you. Type the first line in the comments, along with the title of the book and the author. If you’d like, check out the books other readers have featured on their blogs by clicking on the Hoarding Books link at the end of this post.