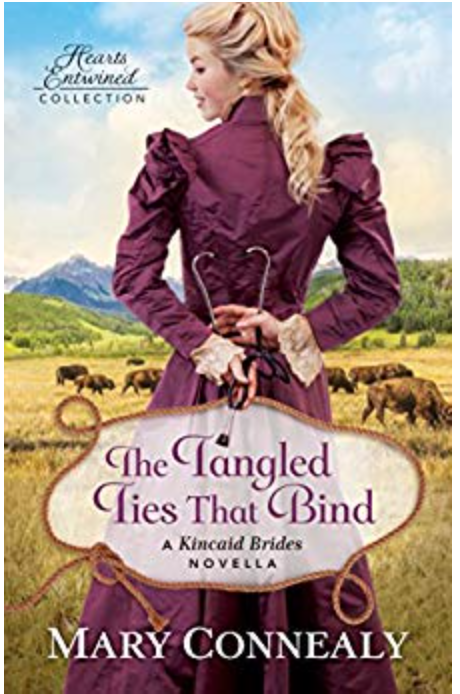 Would you believe we had snow last night in Michigan? While others are posting pictures of tulips, daffodils, and even Japanese Cherry Blossoming trees, our just-starting-to-bud tree limbs are covered with snow. But when I look at other parts of the west and northwest, I clap a hand over my mouth to stop myself from complaining. Things could be much worse. While we had about an inch of snow, it seems others are buried under the white fluff. Things could definitely be worse...much worse. So now I find myself thankful for one inch of snow.

The book I'm featuring this week on First Line Friday is a short novel by Mary Connealy called The Tangled Ties That Bind (Hearts Entwined Collection): A Kincade Brides Novella.

Home. One more hour on the trail and Connor Kincaid would be home for the first time in five years.

This is a sweet novella about Connor Kincaid and Maggie, his cousin, but not by blood. She was adopted. These two grew up together, but when Connor realizes his feelings for Maggie ran much deeper, he knows he must leave. Maggie was much too young. So he moves to an uncles house far away from home for five years.

Now he's back and he's ready to marry Maggie. But Maggie has done some changing while Connor was away. She has certainly developed into a grown woman, but that was expected. What Connor hadn't imagined was that Maggie, tired of waiting and waiting for Connor to return, now has goals that do not include him? But Connor knows what he wants and he will do almost anything to get Maggie to agree to marry him.

The story was enjoyable although it was not my favorite of Mary Conneally's books. The ending seemed too quick and the whole story is not as intense as her other books have been. But it's still a nice story.