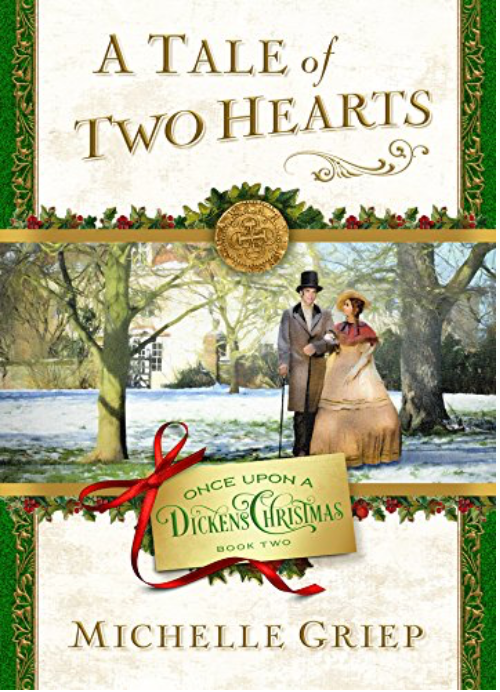 And the Christmas Season has begun, at least for me. I know that not everyone will agree, but in our house, Thanksgiving is a part of the Christmas Season. I don't skip Thanksgiving when I decorate in the middle of November. As a matter of fact, our Thanksgiving tradition is to fill our house with family and then invite people from our community who have no family (mostly internationals since we live in a University town) to come and join us. It's a great time to share our tradition while learning about other cultures. We've done this for years and it has broadened our children's understanding of the world. What is your Thanksgiving tradition?Since we are now in the Christmas Season, the book I'm featuring today is A Tale of Two Hearts: Book 2 in Once Upon a Time Dickens Christmas by Michelle Griep.

Whether I shall turn out to be thehero of my own life, or whetherthat station will be held by anybodyelse, these pages must show.David Copperfield

In the tiny back courtyard of the Golden Egg Inn, Mina Scott lowered her copy of David Copperfield to her lap and lifted her face to the October sun. Closing her eyes, she savored the warmth and the first line to a new adventure, as was her wont whenever Miss Whymsy stopped by and lent her a book. Though she no longer stared at the page, the shapes of the words lingered, blazed in stark contrast to the brilliance against her lids. What a curious thought, to be one's own hero—for the only hero she wanted was William Barlow.Book Description: Mina's father owns an inn with a pub. She only knows William from his visits to her father's establishment, and she's fallen in love with him. William's grandfather must choose who his heir is going to be, either William or his unscrupulous cousin. But William has a couple of strikes against him. His uncle prefers it if his heir is married, which his cousin is, and William has past mistakes to overcome. How can he prove to his uncle that he's really changed? It would take time. What he needed now was a wife, so he asks Mina to pose as his bride for just one meeting. Mina longs to know what it feels like to sip tea in a fine mansion and live the life of a lady. She refuses to live her life stuck serving drinks and meals in her father's pub. William's offer gives her the opportunity to experience all that while posing as the wife of the man who plays the hero in her daydreams. They both battle with their consciences, but make excuses for it. What will happen when their deception is revealed?This is a wonderful Christmas novel. The story has depth with a message of second chances that will truly touch your heart. Just as Christ gives us second chances although we don't deserve it, we must be willing to give a second chance to undeserving people also.Now it’s your turn. First Line Friday is something every reader can participate in. Pick up a book near you. Type the first line in the comments, along with the title of the book and the author. If you’d like, check out the books other readers have featured on their blogs by clicking on the Hoarding Books link at the end of this post.