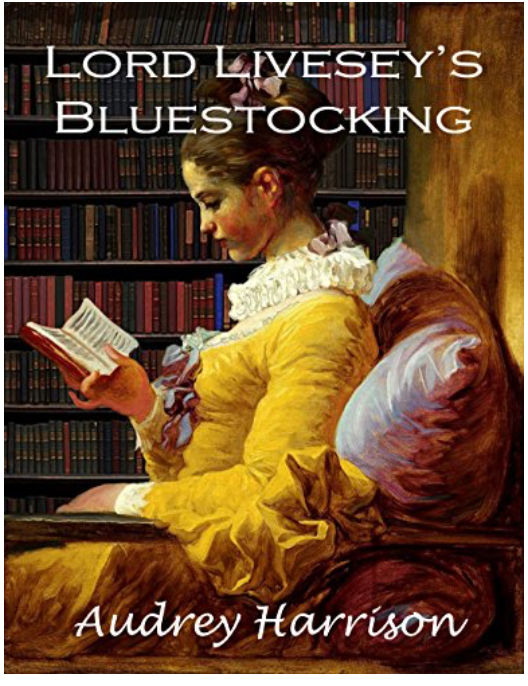 The book I'm featuring this week is "Lord Livesey's Bluestocking" by Audrey Harrison. This is not a Christian novel, but it is a clean historical romance in the Regency time period. Since this is the genre I'm writing in, I've been reading several books like this one.

"The large wooden door was flung open and slammed into the library shelving."

The heroine of the story, Miss Phoebe Westbrook, would normally go unnoticed at balls. As a matter of fact, she is almost considered a spinster. The hero is quite handsome and a widower. Many think he and his first wife had been a love match, which was true at the start. What they don't know is that his marriage was a huge disappointment. Now he has three daughters who need a mother. His sister arranges a house party for him hoping he will find a lady to consider marrying. Lord Livesey reluctantly agrees to try, but soon realizes none of the invited female guests appeal to him. When the hero speaks cruelly to his aunt about Miss Phoebe Westbrook, the maligned lady unfortunately overhears. Since she never had any hope of gaining his interest and only attended the house party to please her family, she nicely sets Lord Livesey in his place. After her setdown, he should have been pleased by her lack of interest, instead, it causes him to notice her. He cannot understand why it is impossible to get Miss Westbrook out of his mind. It doesn't help that she understands his daughters better than he does. She actually helps him to get to know them better. Lord Livesey is certain he will never fall in love, but who will he choose to mother his children? An unexpected proposal sets things in motion Lord Livesey could never have imagined.Now it’s your turn. First Line Friday is something every reader can participate in. Pick up a book near you. Type the first line in the comments, along with the title of the book and the author. Then, if you’d like, check out the books other readers have featured in the comments on this blog and on the Hoarding Books link at the end of this post. You might find a book you would like to purchase simply by reading the first line. You can also click on the title of the book above and it will take you to Amazon so you can see what the featured book is about, check out the reviews other readers have shared, and purchase it if you’d like.