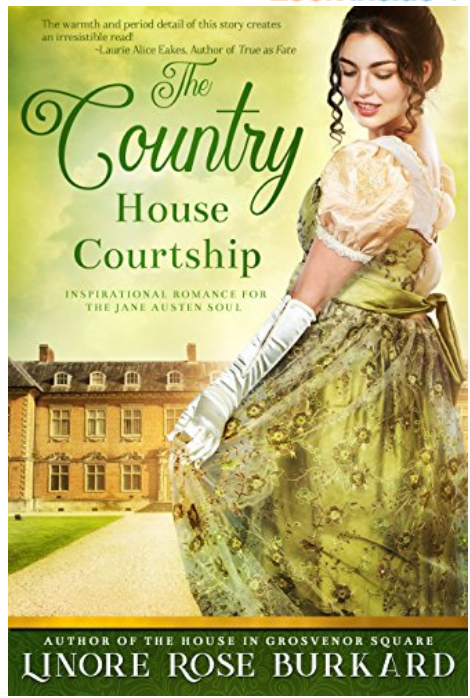 The book I'm featuring this week is the third book in a Chrisitan Regency Romance series I have thoroughly enjoyed. The Country House Courtship, written by Linore Rose Burkard features Mr. Mornay and Ariana again from the first novel in this series, but the romance is about Ariana's younger sister, Lady Beatrice. Although this is a stand-alone novel, I highly recommend reading the first book of the series for your greatest reading pleasure.

Mr. Peter O'Brien felt surely he had a devil plaguing him, and the devil's name was Mr. Phillip Mornay.

Once you have read the first two books, you will entirely understand Mr. O'Brien's feelings about Mr. Mornay. I have to chuckle just thinking about it. Mr. Mornay is swoon-worthy, which you will quickly see when reading the first book. The author does a great job of maintaining the characters she developed in the first story throughout the entire series, but some of her characters do develop and mature. Lady Beatrice's compassion in book two causes her to offer herself in marriage to Mr. O'Brien. Of course, she was all of twelve years old at the time and he didn't take her offer seriously, although touched by her sweetness. In this third book, they meet again. Oh, the awkwardness of it all! The memory of her childish promise haunts her now as she encounters Mr. O'Brien once more with grander hopes and dreams than a country vicar. She aspires for what her sister has found in the wealthy Mr. Mornay. But why must Mr. O'Brien be so appealing?