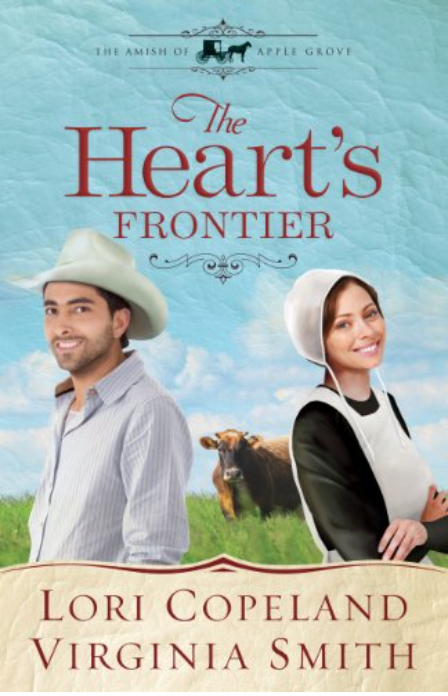 The Amish live quiet lives. Separated from the world. And they avoid retaliation. If someone tries to rob them, they won't fight back. They are a peaceful people. But how challenging it must have been to live by those convictions in the Wild West.

The book I'm featuring is The Heart's Frontier by Lori Copeland and Virginia Smith.

Hot diggety! Shep Carson whipped off his had and flung it in the air. "I knew I'd make a man outa you yet!"

Emma and her Amish family are robbed of all their belongings as they travel on the route to their new location. After miles on foot, they finally arrive at a small town. Tired, unfamiliar with the ways of Englishers, and out of funds, they pray for God to help them. The answer literally falls at their feet when Luke is tossed out of a saloon and lands in front of them.

Luke is the trail boss of his first cattle drive. He is following in his father's footsteps and has every intention of arriving early at his destination. He was going to prove he could do this as well as his father had for years and years. So when this Amish family views him as the answer to their prayers, he has to let them down. He will make certain they have a place to rest their heads, but that's the best he can do.

Will Luke leave this family stranded when he has the ability to help them? Will he risk arriving late at the destination of his first cattle drive? And why does Emma's disgust bother him? As he rides off, he can't stop thinking of her.

The Heart's Frontier is the third Amish novel I've read, but the first historical Amish romance. I enjoyed it very much. Emma is a daring and decisive young lady. She is devoted to her Amish beliefs. But she cannot stop thinking about Luke. If he became Amish, she could marry him.

Luke is devoted to God and he respects Emma's father's beliefs. But he's certain he could never live that lifestyle. As things stood now, her father would never approve of him for his daughter. He must forget her. Will these two ever find a way to be together?

This is a well-written and adventurous story. It has great side characters which adds depth to the story. The main characters are especially well developed. I look forward to reading the next book in this series.

To read more of this book, click on AMAZON.

Pick up a book near you. Type the first line in the comments below, along with the title of the book and the author. If you’d like, check out the books other readers have featured on their blogs by clicking on the Hoarding Books link at the end of this post.