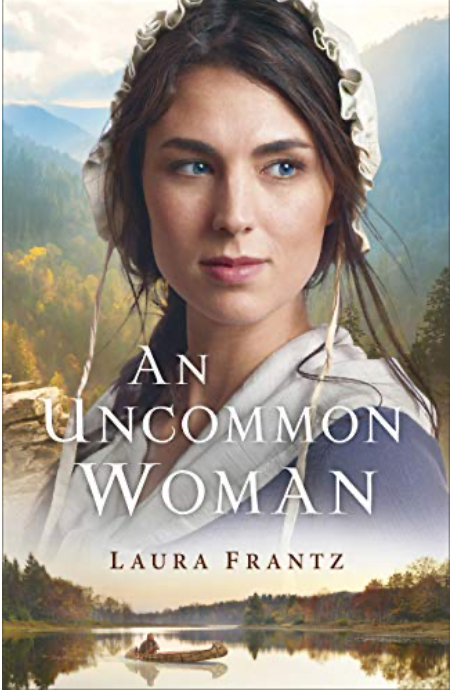 The novel I'm sharing today is An Uncommon Woman by Laura Frantz. This is a Historical Christian Romance in the western Virginia mountains in 1770.

Why could she not quit pondering that flounced petticoat?

Tessa would love nothing more than to leave behind this place where her father lost his life at the hands of Indians and where they were threatened to be attacked again at any moment. Her best childhood friend, Keturah, was taken captive by the Lenape tribe years ago when she was still a child, and they never saw her again. Tessa longs to live in a city where none of these threats exist. Of course, people in cities did have to battle disease, but that didn't seem as terrible as the danger she and her family faced every day in the frontier. There wasn't much sense dreaming such things, Tessa told herself, since she doubted she would fit in with the fancy women in civilization. Instead of ball gowns and dainty slippers, Tessa had learned to shoot a gun, swallow fear, and become tough in order to survive.

Clay Tygart is not your typical 18th-century man. Like Tessa's friend, Keturah, Clay had been kidnapped by Indians when he was still a child. However, he became a redeemed Indian captive and returned to his relatives. Clay was a hero after the French and Indian war, and was now made commander of the fort bearing his name. He has no interest in marriage because his career isn't conducive for family life. Besides, it seemed that everyone he loved ended up dead. Clay certainly can't deny, at least to himself, the strong attraction he feels when he encounters the lovely Tessa. She was completely different from the ladies who had vied for his attention in the city. But he refuses to give into his feelings for her.

A very public kiss might change his mind. And how will he respond when members of the Lenape tribe who raised him, take Tessa captive? What price must he pay to get her back and into his arms?

This is an intriguing, somewhat mysterious, and action-packed romance that is hard to put down. I listened to it on Audible and thoroughly enjoyed not only the story but also the narration. I highly recommend this novel in any format.

Pick up a book near you. Type the first line in the comments below, along with the title of the book and the author.