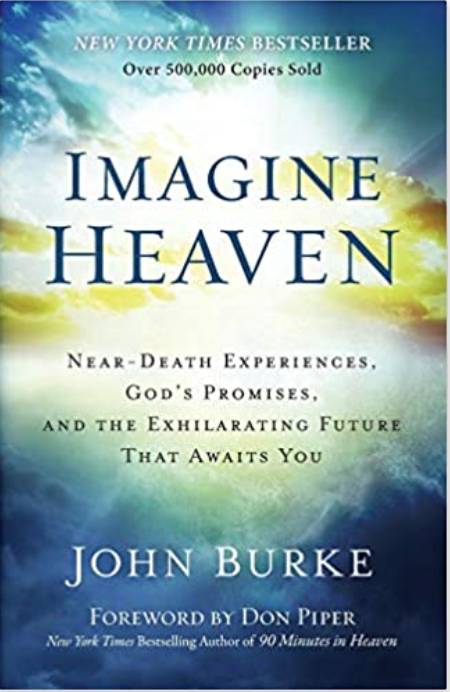 At the recent loss of my husband, a dear friend sent this book to me as a gift, Imagine Heaven, by John Burke. I can honestly say that it was one of the most helpful gifts I received. I'll tell you why...

Never in my life was I ever interested in reading a book about near-death experiences. They seemed outlandish since I didn't know the people personally. How could I know if these stories were even true? I had seen reports that claimed that everyone saw the light and everyone seemed to make it to heaven no matter what their religious beliefs were. After their research was completed, it was determined that hell did not exist and that, if there was life after death, we all end up in the same place. Can you blame me for my reluctance to want to read about NDE? Maybe you feel the same as I did.

Upon the loss of my husband, heaven became much more than a curiosity to me. I longed to understand and imagine what Curt might be experiencing now. So when this book arrived in the mail, and I saw that a very trusted friend and Assemblies of God credential holder had sent it, I decided to keep an open mind and give the author a chance to explain what he had discovered. Starting with the Foreword, I continued through the Introduction, devoured all the chapters, and by the end, I wished the book was longer. So I read Appendix A and B, which also contained helpful information.

I was astonished to discover how many people have had a near-death experience. Why would so many people lie about what they saw? John Burke shares over 100 stories of NDE. But he is clear in saying that none of these experiences are theology. Only the Bible is theology. All else must align itself with Scripture or it is suspect. Having read that, I felt comfortable continuing to read. After all, why would God allow so many people to live and tell about their NDE? Perhaps, we should look at these stories more closely. That's what this author does in this book.

As I read the stories, it was amazing how many of them are the same as the one before it and the one after it. In case after case, people saw basically the same thing. They do describe it differently. After all, if ten of us saw Disneyland for the first time, I'm sure our descriptions would have many similarities and yet each of us will expound on a different part of what we saw depending on what impressed us most.

But the question that nagged at the back of my mind was, why does it seem that everyone makes it to heaven? I knew that wasn't theologically correct and I wanted an answer. John Burke did not disappointment me. In each chapter, another one of my questions were answered. When I got to the chapter on hell, my eyes were opened to things I never realized. Since I was a little girl, I knew hell would be a place of torture. When people flippantly said they want to go to hell because that's where all their friends would be, I knew they would be greatly disappointed. "Friends" are something good. Hell will consist of absolute evil and no "good" will be found. Which means people in hell will be lonely, in absolute darkness, and tortured. But I have to tell you that reading this chapter made me realize that I could never have imagined how torturous and evil hell would be. And keep in mind that the people who were shown parts of heaven, were only allowed so far and no closer. In the same way, I doubt the horrifying discoveries of those who experienced hell was even close to all that would still be in store for them if God, by his grace, had not sent them back and given them a second chance.

I will not say more. I actually told you very little about what this book contains because I want you to experience it the way that I did. As you're reading a chapter, questions will come to mind you will want answers to. But allow the author to take you on the journey chapter by chapter to gain the full impact of knowledge that you will slowly gain as you read the experiences of those who got only a glimpse of what is in store for all of us one day; either heaven or hell. The decision is ours to make. But we will all have to answer the question Jesus will ask each one of us: "What have you done with the life I gave you?"