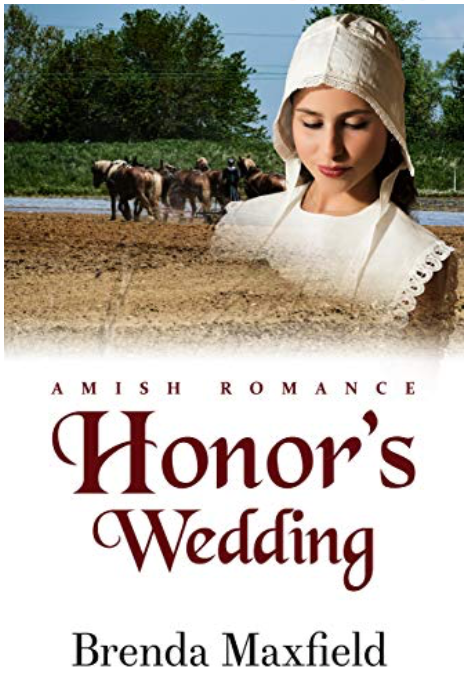 I just finished listening to Honor's Wedding by Brenda Maxfield on Audible. This is an Amish romance of marriage before love. As popular as Amish romances are, this is just the second one I've read or listened to. I can see why people enjoy them.

Click on AMAZON to read the book description and purchase your copy.

When Honor is told by her parents that they will have to leave Hollybrook, the town her parents and she had grown up in, so her father can get a new job, Honor comes up with a plan. She knew what needed to be done so her parents wouldn't have to move away. She would marry Gabe Chupp. The fact that she doesn't love Gabe doesn't deter her from her plan.

It's not difficult to convince Gabe that Honor loves him because he's had feelings for her for quite some time. He thought Honor was out of his reach, so he never attempted to court her. You can imagine his joy when Honor starts flirting with him. Their courtship is brief so they can marry before Honor's parents have to move out of their home. The plan is for her parents to move in with them after the wedding. Gabe is in complete agreement. But things seldom turn out the way we plan when we try to manipulate our situation. Now the wedding is approaching and Honor dreads having to live with a man she respects but does not love.

Honor doesn't have the heart to tell Gabe she no longer wishes to marry him. After they are wed, Gabe is disturbed by Honor's attitude, but he continues to be patient and treats her kindly. When tragedy strikes, he finally discovers the truth. Honor does not love him and never has. She had used him. Would they forever be stuck in this loveless marriage?

I was frustrated by Honor's selfish attitude toward her husband. She's not attracted to him. She's deeply disturbed by the direction her life has taken. Honor knows it's her own fault. But instead of appreciating her husband's patience with her, she continues to feel sorry for herself. Gabe is a true hero. Of course, when he discovers the truth, he becomes angry. No one can fault him there. The author does a great job of concluding this novel. Once I started this book, it was hard to put it down. I had to find out how it would all turn out.

I listened to this book on Audible. The narration was well done.